Hike-a-bike, is it worth it? 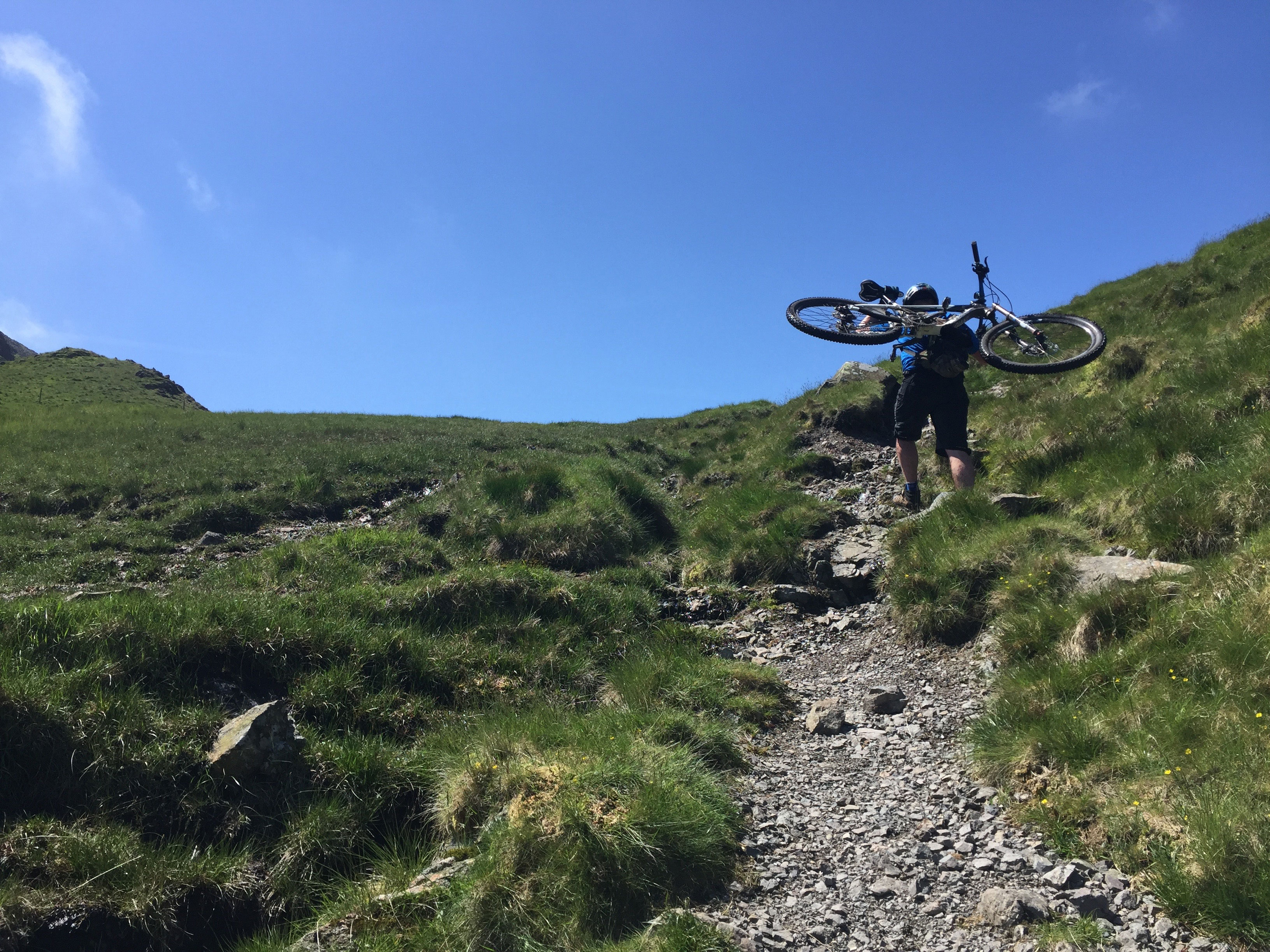 If you are anything like me, you’ll relish the chance to have a weekend away in the hills with your mates riding. When you mix in amazing scenery, inappropriate humour and completely lucking out with the weather, then the result was a perfect cocktail.

This was also the first proper big mountain ride I’d done on my new Canyon Spectral and me mate Daaaave (aka Danger) wanted to show off the autonomous driving abilities of his fancy new Volvo (btw, it doesn’t really work once you’re off the M6!), so we were VERY excited driving up from the Midlands to try out our new toys.

We met the 3rd member of our crew for the weekend trip, a hardened northerner, on the outskirts of the Lakes and proceeded to follow the Volvo’s sat nav down a stupidly tight lane that was gated. I could see Jon in the mirror of our car shaking his head at us as if to confirm we were fish out of water in proper hills.

“Dave, you sure it it’s this way to the hostel? seems a bit like a track for… too late”

A number of hops out of the car to open and close gates and a great view of the road we should have been on and we were finally at our destination. Our starting point and the ‘planning’

We’d picked a cracking spot to bed down. The YHA in Buttermere is cheap, friendly, clean and most importantly, has an amazing drying room full of stinking socks and muddy boots. It was also where we managed to lock our bikes up. So after several beers in the local pub and at least 7 minutes looking at the OS map planning the following days ride we were ready to go at first light! It would be simple; we would climb over 4 mountain passes in the blazing sun, then wheelie our way back to the pub to talk about our heroic efforts. On one of the hottest days of the year, this was easier said than done.

The route is fairly well known. As a word of warning, I probably wouldn’t try this if it is very cold or icy. I like to think I can handle a bike ok, but I can imagine attempting the descent if there is ice about would be madness!

Starting at the YHA, we climbed road to the other side of the Lake and up into the woods. There is a lower path that walkers take, but the bridleway is a bit higher. This is a great warm-up before the first climb and as you exit the woods you are presented with epic views like this The first pass of the day was High Crag (south end of Buttermere). It wasn’t long before we had our bikes on our backs and comments from walkers “oooh it would be easier riding luv, ha ha ha ha” or “Are you going to ride those down the other side?”. No, we just like carrying them.

Over Scarth Gap, we’d earned our first decent of the day and Dave’s first puncture about 200 yards into it. Sigh. Descending down the west side of Hay Stacks, to the bottom of the valley was nothing short of stunning. Fast enough to be fun, but technical enough to make your bum hole twitch occasionally.

Past the Black Sail Hut at the bottom of the valley and good chance to take in the sheer size of the mountains around us. We are now fully committed and on to the next pass. Black Sail Pass is another long climb with a lot of ‘bike-on-your-back’ action. I got very used to watching Jon the Yorkshire goat pound his man-legs into the hillside as I tried to reposition my bike for the millionth time on my bag. I used the excuse of taking photos rather than admitting I am weak human being that was ill-prepared for such efforts. That said, I love that fact there is no pressure to perform in mountain biking. It is about the journey, the banter and the scenery. The descent down to Wasdale Head is pretty epic too; made more epic by the fact there is a pub in the village. A quick bit of showboating on a pretty bridge in order to capture an Instabanger #wheeliewednesday and a perfect time for refuelling! From here continue on with Great Gable on your left (north) up towards Seathwaite Fell. This looks rideable from the bottom but is very much another hike-a-bike higher up. It was on this climb I accidentally dropped a little plastic case off the side of the path whilst having a rest. It took a LONG time to recover it, energy I could have done with saving. Another cracking decent down to Seathwaite and a spin out to the main road junction. We took a left up the Honister pass where we were humiliated numerous times bike roadies doing roughly 10 times the speed I was on my big knobbly tires. As someone who rides road bikes too, I made the mistake of trying to jump on the wheel of a couple of them. “Just enjoy the climb, you are not a roadie today”. You gain a lot of height a lot easier than the previous 3 passes. This was very welcome despite being a tough road climb. And to top it all, you can buy ice cream at the top. Boom!

The final climb of our route was the ride up by the slate quarry. We tried to bribe the quarry worker to let us hang on to his digger, but the lure of free ice-cream was not enough to convince him to drag 3 idiots in bright helmets up to the top. This final climb was a killer and everyone warned us that the decent the other side is the hardest. There are 2 reasons Warnsdale can catch you out. Firstly the slate is incredibly sharp. We were lucky to not rip a tire here considering the speed we were carrying. The second reason is, we were all utterly knackered. A steep, technical descent, combined with tired arms, big boulders and a false confidence was dangerous, but we were loving it. This is why we ride, why we climb, why we make our legs scream on the way up. This decent on the right bike is nothing but epic. Before returning to the YHA, we pretty much rode into the lake. The site of 3 broken men in nothing but bibbed shorts hobbling on the painful lake shore trying to wade out to a depth to submerge was nothing but confusing to passers-by but we didn’t care. As parts of our body turned themselves into acorns to hide from the cold water, we lay back watching the oil-slick of sweat slide off our bodies. It was the end of an epic day.

Is the 4 passes route difficult on a mountain bike? Yes. Was it worth it? Absolutely. Don’t get me wrong, the pushing and carrying of a full-suss mountain bike is not easy for that many hours but you can’t get this kind of natural trail without putting in the effort. This is no trail centre, but if you can commit a full day to it and want to take in some amazing views, I can highly recommend it.

Link to the route can be found here, or just Google it!

Find someone that looks at you like Dave looks at 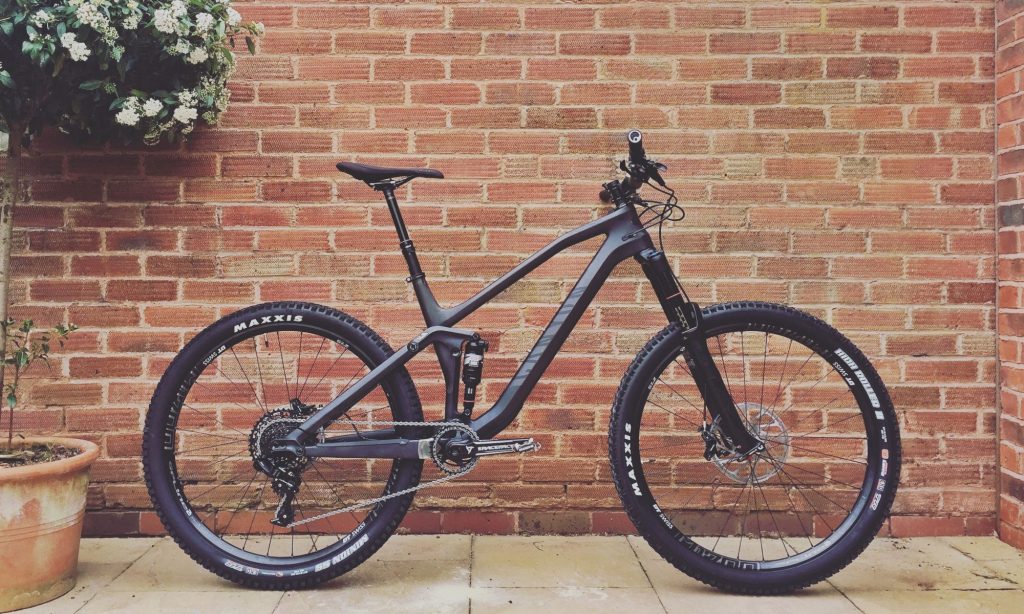 Is this a reliable review? If you are looking for a full on technical breakdown of the Canyon Spectral CF 8.0 then this ain’t the…